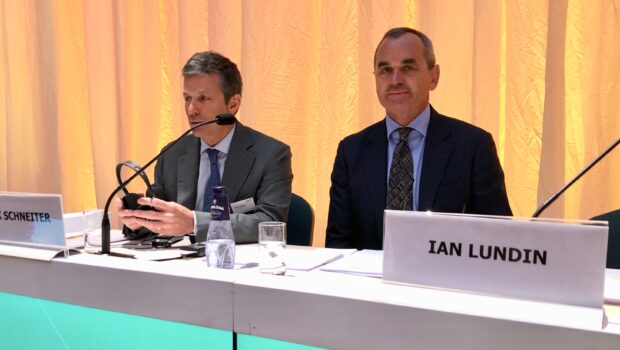 Ian H Lundin and Alex Schneiter are suspected of complicity in the commission of war crimes in Sudan, 1999-2003.
December 23rd, 2021 | by Karolina Bonde

The court denies another claim to dismiss the case

Lundin Energy’s former CEO Alex Schneiter filed a request to the court to dismiss the indictment against him. The District Court swiftly rejected the claim, an indication that they are starting to lose their patience with the numerous meritless claims made by the defendants in the Lundin case.

The Stockholm District Court has faced a number of requests from Lundin’s lawyers and yet again they rejected an attempt by Alex Schneiter to dismiss the indictment against him. This time, Schneiter’s lawyers claimed that the Swedish Court had no jurisdiction over him. They referred to the fact that even though the Swedish courts provide universal jurisdiction through Chapter 2 Section 3(6) of the Swedish Penal Code, this is limited by an internal rule[1] providing that there must be support in international law for universal jurisdiction to be applicable.

The defence referred to expert opinions by Eric Bylander, Professor William Schabas and Dr. Guenael Mettraux, arguing that the Swedish Court has no jurisdiction over Alex Schneiter as there is no support in international law that universal jurisdiction can be applied over crimes committed in a non-international armed conflict or in situations when the accused is not voluntarily present in the territory of the State where it is indicted. The Court has rejected both arguments.

The International Committee of the Red Cross’ customary law study, which is the most comprehensive and internationally recognised study in the field, provides that States have the right to apply universal jurisdiction within the framework of their national law to crimes committed in a non-international armed conflict. The Prosecution relied on this, stating that the rule provided strong support for the fact that the Swedish jurisdiction rule is compatible with general international law, and that the district court is competent to try the prosecution against Alex Schneiter. The District Court agreed with their argument.

Accused not being present in the territory of the State concerned

The defence referred to the fact that Alex Schneiter is a citizen of Switzerland, he does not reside in Sweden and did not do so when the charges were brought. They state “it is not possible to apply universal jurisdiction by forcing people living abroad to come to Sweden in order to prosecute them for violations of international law that have taken place abroad”.

Universal jurisdiction is generally defined as the ability of the domestic judicial systems of a state to investigate and prosecute certain crimes, even if they were not committed on its territory, by one of its nationals, or against one of its nationals. Requiring that the accused is a resident or residing in Sweden in order for him to be prosecuted undermines the rule.

In this case, however, there is a connection between Schneiter and Sweden. Public prosecutor Henrik Attorps highlighted that the crime Schneiter is accused of was committed within the framework of his work as a senior representative of a Swedish corporation and that “there is thus a clear interest in Sweden to exercise the universal jurisdiction that exists for the crime under Swedish law.” An argument that the District court concurred with, adding that “the crime was committed together and in agreement with a Swedish citizen”.

The two defendants in the Lundin case and their legal teams have a pattern of making meritless claims. To mention a few examples, when the Swedish Ministry of Justice’s decision to authorise the prosecution was made public, the accused appealed the decision to the Supreme Administrative Court arguing that two Government ministers, including the Minister of Justice, who had been involved in making the decision, were not in an independent position. Their appeal was rejected. The appeal did not appear to have any legal merit, as the Government is bound to only consider proportionality and the national interest, not the case itself.

Schneiter has on several occasions argued that his human rights have been infringed, claiming that the prosecutor has not provided the defence with enough information about the crimes he is suspected of. However, according to Swedish law, the information that he demanded did not have to be provided for prior to the indictment. In April 2020 the two defendants made submissions to the Stockholm District Court requesting that they end the investigation against them on the basis that their right to a fair trial within a reasonable time was violated. The District Court dismissed their claim. The accused proceeded to appeal the decision all the way to the Swedish Supreme Court who ultimately denied their request, stating that it had “not found any reason to grant leave to appeal.” It appears as the defendants were attempting to misuse human rights law to avoid liability. The Swedish Prosecution Authority also granted the defendants extra time to comment on the investigation and request additional investigative measures on at least 4 separate occasions.

In short, Ian Lundin and Alex Schneiter have let their lawyers make use of any legal procedures that can be applied in order to complicate the work of the prosecution and the court. The fact that the District Court denied Schneiter’s more recent appeal in such a short amount of time could be an indication that the Court is getting frustrated with the constant attempts to derail the trial. We can only hope that this is the last time the defendants make a meritless claim, delaying the trial and the survivors’ long-awaited access to justice.

Lundin Energy sells out to AkerBP →

Lundin’s crimes – were they intentional? → 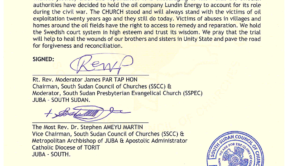