A 2008 satellite image analysis by earth observation specialist Erik Prins shows massive changes in the traditional agricultural land use patterns in Block 5A since the start of the activities of the Lundin Consortium. The satellite images support the witness testimonies that were reported by ECOS, Christian Aid, UN, HRW and others. The report by Erik Prins demonstrates that people disappeared from the oil road and the areas near Lundin’s main oil exploration area, Thar Jat, and confirms that they sought shelter south of Nialdhiu. Erik Prins came to his conclusions after analysing satellite images from 1987, 1994, 1995, 1999, 2000, 2002, 2004, 2005 and 2006. 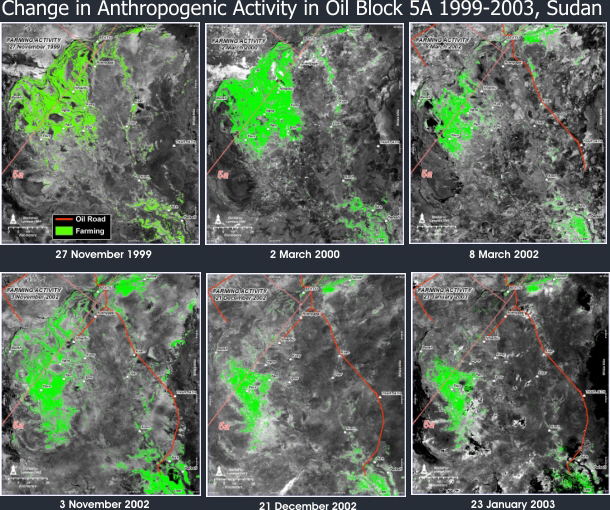 The biggest change in land use is visible comparing the satellite images between 1999, 2000 and 2002. A large section of the population moved away from the roads, away from the oil field and the road that Lundin built. The image analysis supports the eyewitness reports from that time.

In and around Lundin’s concession area, people traditionally live along river banks. Their round houses, Tukuls, are usually set up in a row. Around the settlements people plant crops and let their cattle pasture. Houses and villages are well-featured with high resolution satellite images, and can even be identified on Google Earth. Early dry-season images (November) were preferred – as they will best reveal on-going farming activity. In this area in November livestock is still near the settlements and harvesting has just ended, and satellite images can show a ‘signature’ of human activity. Also, in November the extent of bush-fires is limited. Satellite images can unequivocally show year-on-year changes in agricultural land use patterns.

From a satellite image it is possible to determine what the ground is used for at a particular time. The easiest to determine is the difference in light reflected from the ground. The lighter an area is on the image the more human activity can be expected on the ground, including cattle grazing.

In the study Erik Prins compared the data with testimonies from the ground. He mapped battles, reported incidents and locations of refugee camps. The satellite images confirm the changes that would be expected based on those testimonies and the main contemporary reports, confirming in detail the larger picture that people moved massively away from the reported fighting.

‘I have used several well-known methods to see livestock farms. They allow to determine in which areas animals and humans are fed by land. But I’ve also used more sophisticated methods to verify the images. All methods show the same results. People disappear from areas where there were battles and they reach areas south-west, south or northeast of the oil road.’